Advertising spend in the UK grows for 19th consecutive quarter

The UK advertising industry has saw spend rise ahead of forecasts in the first quarter of 2018. Up 5.9% year-on-year to £5.7bn, marking the 19th consecutive quarter of growth.

“This investment boosts company profits and overall GDP, creates more jobs and helps our media sector to continue to invest in the creative content and technology that the public values.”

According to the AA/Warc report, the biggest drivers of spend in the quarter included radio, which was up 12.5% to record its strongest growth in four years. And digital where spend was up 10.8%, specifically search spend which now accounts for almost three in ten pounds spent on advertising in the UK.

Out of home and TV were also up 5.3% and 5% respectively. Along with print display ad revenue for national newsbrands which rose for the first time in seven years.

It comes in the face of continued concern over the ongoing Brexit negotiations. The AA, the Internet Advertising Bureau (IAB), Accenture and Deloitte last month joined forced to outline their demands in a letter to prime minister Theresa May.

“If government can secure a good outcome from the Brexit negotiations and introduce a business-friendly immigration policy, we should continue to see sustained UK market growth and continued export success for advertising,” continued Wooford. 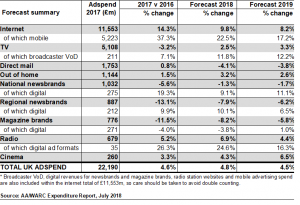 If you want to make sure your using your marketing budget to its full potential, then
give our team a call on 02921 320 200 or email at [email protected]