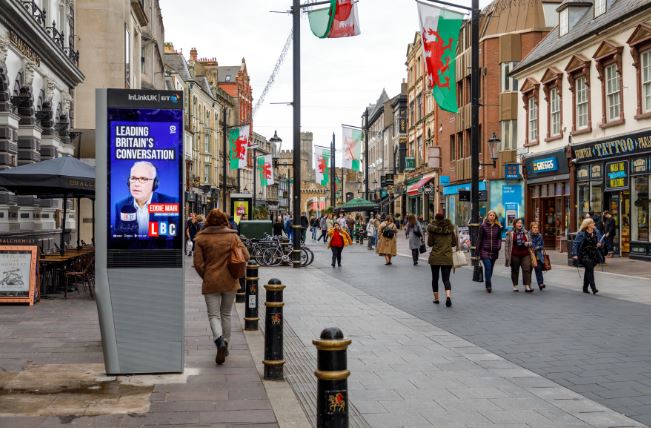 Cardiff joins Swansea as the second Welsh city to benefit from free InLinks, which already have more than 215,000 subscribers across the UK.

The first three dual-language InLinks have been activated in the city, providing ultrafast Wi-Fi speeds of up to one gigabit per second (1Gbps), the fastest free public Wi-Fi service available in the UK.

The first of the fully-accessible InLinks have recently gone live on Queen Street, St Mary Street and Bridge Street, with further activations expected in the coming weeks. With the roll-out of the first three InLinks in Cardiff brands have access to a busy high street audience.

Not only do 77% of consumers agree InLinks have a positive impact on their communities, our research has shown that 75% of them feel more positively about brands that sponsor services such as Wi-Fi, charging locations and travel information.

The UK rollout has so far seen more than 522 screens installed in Swansea, Manchester, Birmingham, Leeds, Gateshead, Glasgow, Southampton, Newcastle and Sheffield, as well as nine London boroughs; with hundreds more to be installed in key towns and cities across the UK.

Since the first InLink was launched in June last year, more than 215,000 people have subscribed to the service’s free Wi-Fi, using enough data to download the equivalent of more than 24.7 million songs. The InLinks have saved people more than £980,000 in free calls, with 50,000 calls being made on average every week across the UK.

InLinkUK and its partner BT have worked closely with stakeholders in Wales to ensure that the new InLinks will support both Welsh and English languages, with both the screens and the tablet showcasing dual language information at launch.

Cardiff’s local community are also benefiting from the InLink’s digital screens that display real-time information, including local events and interesting facts, as well as community messaging.

Adrian Field, Executive Director, for Cardiff BID added, “We are delighted that Cardiff will benefit from the installation of InLinks to help improve the aesthetics of an area, safety, and promoting key messages. It allows those in the city centre to have the means to make their visit an even better experience. We expect them to be widely embraced by visitors, residents and employees.”