The Most Complained About TV Shows of 2018 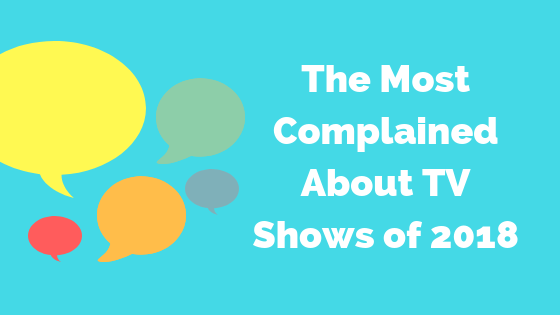 Perhaps unsurprisingly, Celebrity Big Brother was the television programme that Ofcom received the most complaints about in 2018.

Over the year, they received a total of almost 56,000 complaints about programmes from viewers and listeners. Together, the top ten most complained about television shows prompted more than 47,000 complaints, making up 86% of the year’s total.

Channel 5’s Celebrity Big Brother attracted the most complaints in 2018, with 27,602. Most of these were about an allegation of physical abuse made by Roxanne Pallett against Ryan Thomas.

Second on the list was an episode of ITV’s Loose Women. This prompted 7,912 complaints, most of which were about an interview with guest Kim Woodburn.

ITV reality shows Love Island and The X Factor also featured in the top 10 (ranked 4th and 10th respectively), along with storylines on Coronation Street (5th) and Emmerdale (6th) which prompted hundreds of viewers to get in touch with Ofcom. Good Morning Britain (7th), This Morning (8th), Sky News (3rd) and I’m a Celebrity… Get Me Out of Here (9th) complete the rankings.

Ofcom launched 137 investigations into TV and radio programmes in 2018. Of those, 129 were concluded this year. They found the broadcasting rules were broken in 80 cases; 33 cases were found to have not broken the rules; and 16 cases were resolved – which means in those cases Ofcom’s concerns were satisfied by the broadcaster.

The top ten in full: